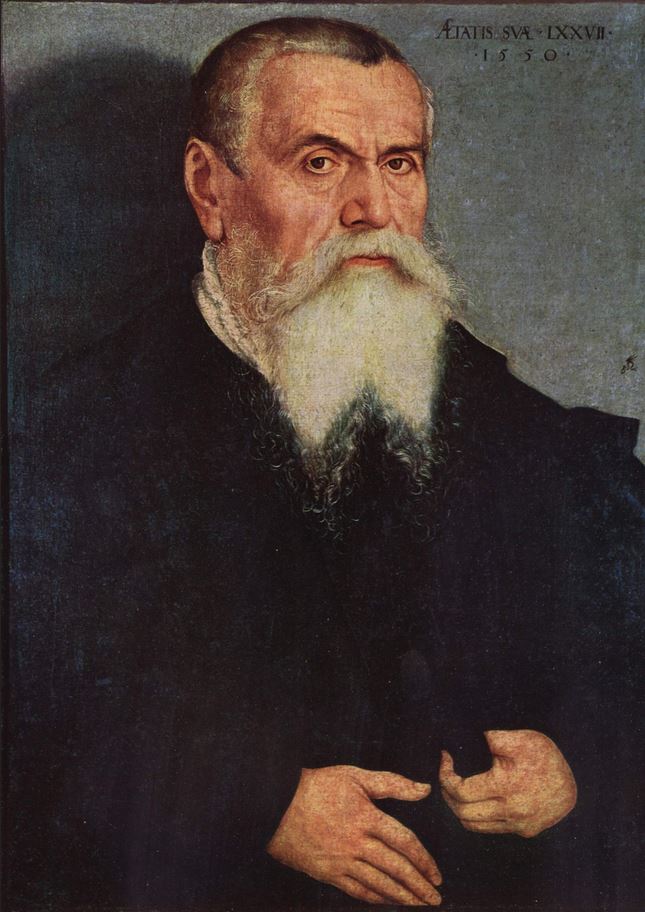 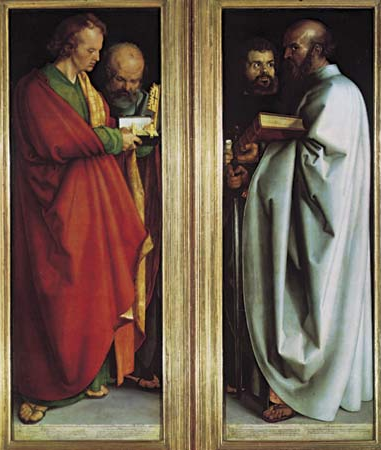 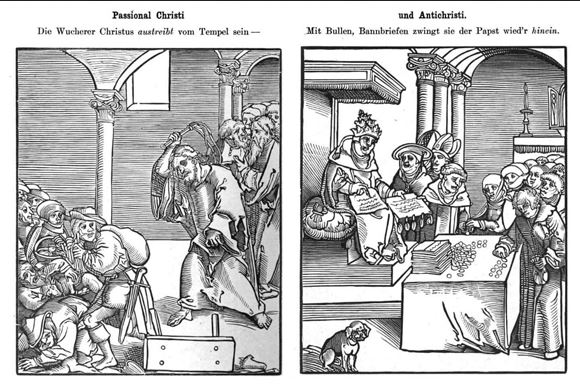 Christ Drives the Moneychargers out of the Temple

The role of art and its relationship to the Reformation is both dynamic and complex. In some parts of Europe, the impulse to reform the church was joined with an iconoclastic movement. Iconoclasm reads the command which forbids graven images to include most of all images. As a result in some parts of Europe, particularly Switzerland, but also parts of the British Isles and the Netherlands, churches were stripped of all art and images were burned as “idols.”

The Reformation in Saxony progressed along a different path. Martin Luther, the Reformer in that part of Germany had far more positive interests in art and its value. He was a musician himself and quickly grasped the power of song to spread the essential ideas he was proposing. The hymns of Luther, easily learned and popular, often were the first thing people learned about Luther and the Reformation. Luther also appreciated the visual arts. He forged a long-lasting and fruitful partnership with the court painter of the local nobility, Lucas Cranach, who was both an admirer of Luther and an early convert to Luther’s reforming movement. Together, Luther and Cranach used both text and image to promote the Reformation. Cranach should be seen as a profound theologian himself and an important interpreter of Luther’s thought. In an era when literacy rates were rising, but still quite low by modern standards, Cranach’s woodcuts, paintings, and engravings were critical to the success of the Lutheran Reformation.

Art was, however, more than a tool for Luther’s cause. He also considered it to be a form of worship. Luther held a very positive view of the created world, taking great delight in food and drink, beauty, and humor. He was never one to seek some mystical escape from the physical. He saw all things as a gift from God. In fashioning words and music into a song, applying paint to a canvas, or sculpting a statue Luther saw an opportunity to worship God with the whole life and that the whole creation participated in that worship.

The Reformation and Use of Technology

The Reformation is many things and historians, theologians, and others have noted its great complexity. Recently it has become increasingly recognized that the Reformation was also an information technology revolution, similar to what we are witnessing in the development of the Internet and other forms of digital communication.

In a symbiotic relationship with one another, printing technology made the Reformation possible and the Reformation promoted and made possible the printing industry. Johannes Gutenberg had introduced a moveable type printing press several decades before Luther came onto the scene, but the industry did not understand its own power. Most operators of printing presses went bankrupt, including Gutenberg himself – twice! It would be the reforming Augustinian Friar, Martin Luther, who would both grasp the power of printed materials and intuit how to use them.

Luther quickly grasped that through printing, cheaply reproduced fliers, pamphlets, books, and posters, his ideas could spread far beyond the ability of ecclesial censors to quash them. A skillful writer, Luther’s works were often sold out within days of publication, forcing multiple editions within months. At one point, Luther’s publications accounted for 24% of everything published in the German language. His books flew off the shelves of the booksellers’ stalls. In several instanced, they were printing the first chapters of his works while he was writing the later chapters.[1]

It was not only words which made this a success. Luther’s partnership with artists, especially Lucas Cranach, enabled his ideas to be depicted, visualized, and explained. In this Luther was meticulous and wanted his books both to speak the truth and to be well made and interesting to behold. He criticized poor craftsmanship by printers and could cause great anxiety in a print shop by threatening to send his business elsewhere. Cranach’s woodcuts enhanced both the beauty and the message of Luther’s works.

When the dust of the Reformation had settled, not only had European Christianity been transformed, divided, and forever changed, but a whole new industry had been born. Never again would a single author dominate publishing like Luther dominated German publishing in the 1520’s. That is not because there were no more authors like Luther, but was largely due to the fact that publishers had learned from Luther how to produce materials which could turn a profit and no longer had to rely on the dynamism and genius of one man.

[1] For a more fulsome treatment of the role of printing in the Reformation consider the recent book by Andrew Pettegree, Brand Luther, (Penguin Press, 2015), from which this information was taken.